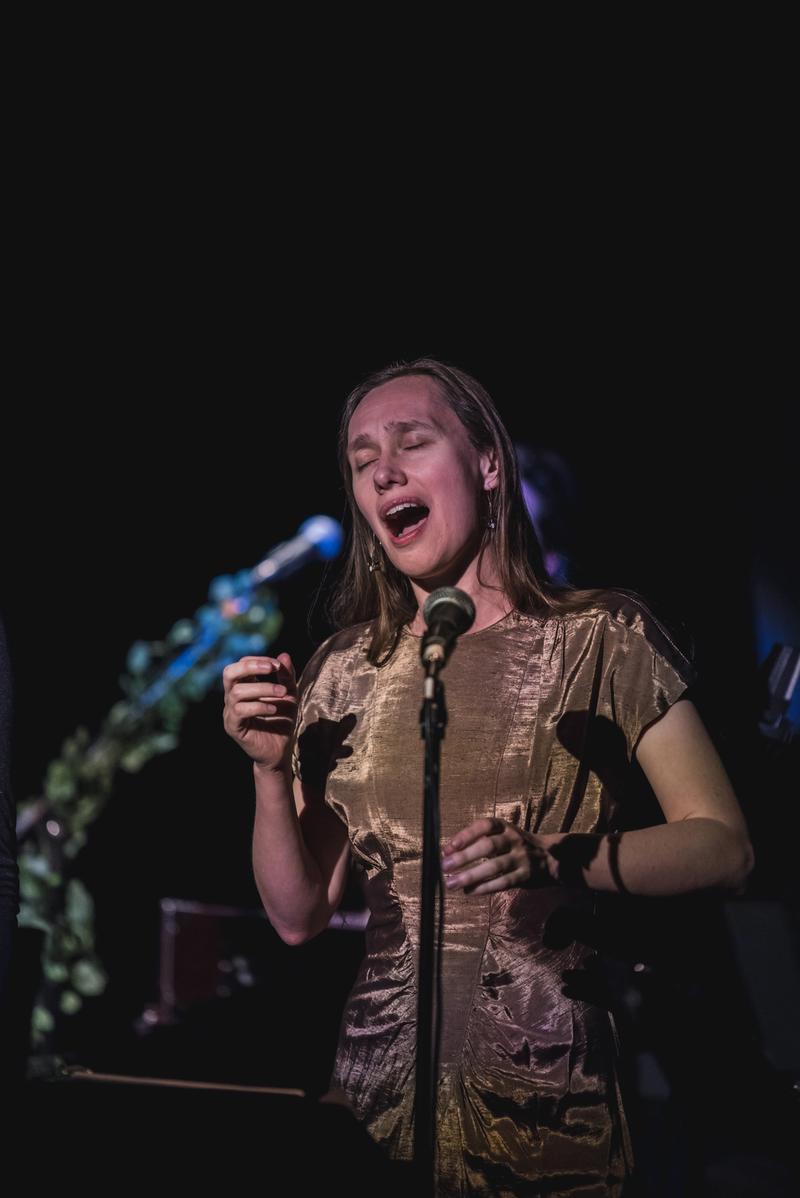 Gelsey Bell is a singer, a songwriter, and a scholar - a composer-performer, a teacher, and a sound artist. She has been described by the New York Times as “one of New York’s most adventurous musicians” and the “future of experimental vocalism.” She performs regularly as an vocalist and multi-instrumentalist, culling from a wide range of techniques and styles to create her own performance works, to literally voice those of contemporary composers, and to explore improvisation.

Her works often center the voice and range from song cycles and sound walks to collaboratively created operas and structures for improvisation. Her sound walk Cairns (2020), created with composer Joseph White, was listed on the New York Times’ Best Theater of 2020 list. She is currently a HARP Artist at the HERE Arts Center, developing a new opera called mɔːnɪŋ. After many years as a singer-songwriter, during which she released two studio albums, Under A Piano (2005) and In Place of Arms (2010), Gelsey began to bring her songwriting into the experimental world through song cycles and collaborative works. These include SubtracTTTTTTTTT (2020) and A Series of Landscapes (2020), created with thingNY for online; Skylighght (2019), created with composer and saxophonist Erin Rogers; shuffleyamamba (2019), created with choreographer Yasuko Yokoshi; Prisoner’s Song (2015), created with visual artist Erik Ruin; This Takes Place Close By (2015), a collaboratively composed opera by thingNY; Airs and Interruptions (2015), originally composed for CNDC-Angers/Robert Swinston’s performance of Merce Cunningham’s choreography, with music by John King – this became the album Ciphony (2017); WIFE (2015), which was commissioned by Avant Media; the song cycle Our Defensive Measurements (2013) for five performers, which was commissioned by Roulette and the Jerome Foundation; SCALING (2011) for piano and two vocalists; and Bathroom Songs (2010), which has been performed in bathrooms all over the world. Her smaller pieces include “Murmuration” (2020), commissioned by the String Orchestra of Brooklyn; “Aviatrix” (2019), commissioned by Megan Ihnen and Alan Theisen; the This is Not a Land of Kings suite (2018), which was also released as an EP; Spent Horizon (2015), first performed with vocalist Odeya Nini; “Weight” (2014), which was commissioned by Ne(x)tworks; and Locker Room Duet, created with fiddler Cleek Schrey. She also developed and composed music for Wealth from the Salt Seas with choreographer Anna Sperber and composed music for choreographer Kimberly Bartosik’s You are my heat and glare. She received a 2017 sound/music grant from the Foundation for Contemporary Arts, and both a residency (2015-2016) and a commission (2013) from Roulette and the Jerome Foundation. She has been a resident artist at Mount Tremper Arts, the Kinosaki International Arts Center, and the Exploring the Metropolis Ridgewood Bushwick Composer-in-Residence for 2018 . Her work has been performed throughout North America, Europe, and Japan. 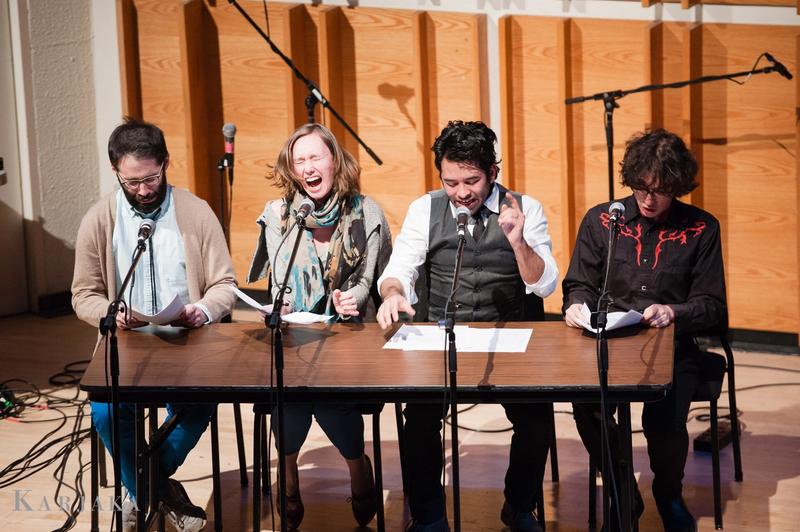 Gelsey is a core member of new music ensemble thingNY and performance collective Varispeed. With thingNY, she has collaboratively written and arranged music for multiple projects including SubtracTTTTTTTTT, A Series of Landscapes, This Takes Place Close By, IN HOUSE, TIME: A Complete Explanation in Three Parts, and the many SPAM extravaganzas. She has also performed in Rick Burkhardt's Passover, Vinko Globokar’s Un Jour Comme Une Autre, and Paul Pinto’s minis and Erin Roger’s Trajectories and Chronolinea (released on the album minis/Trajectories in 2016). As a founding member of Varispeed, Gelsey collaboratively arranged and performed in their critically acclaimed adaptation of Robert Ashley’s Perfect Lives and John Cage’s Empty Words. She has also taken the lead in arranging their three-person rendition of Robert Ashley’s “Love is a Good Example” and Kenneth Gaburo’s Maledetto. Gelsey is also a member of the improvisation trio the Chutneys with Chris Cochrane (guitar) and Fast Forward (percussion). They released their debut album Home in 2019. 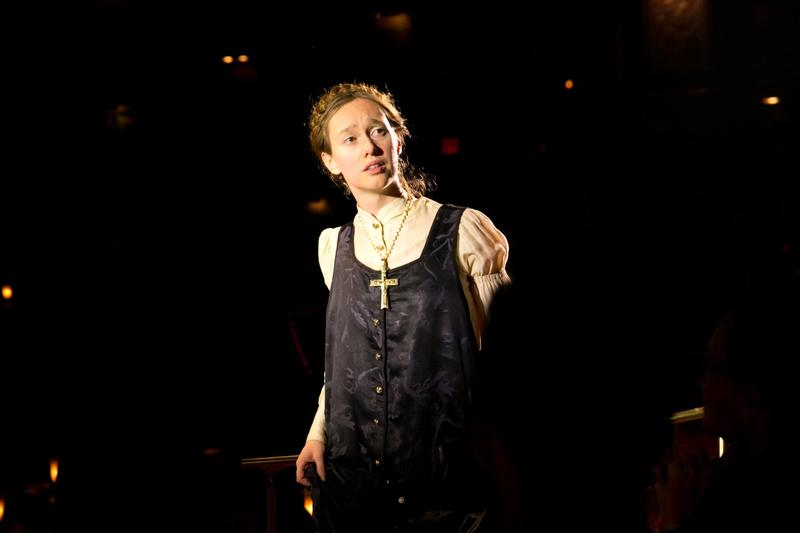 Gelsey has also had the honor to have worked with a wide range of performance creators as a vocalist and multi-instrumentalist, including composer Dave Malloy, originating the role Princess Mary in Natasha, Pierre, and the Great Comet of 1812 (from Ars Nova to Broadway), and as Pearl and a co-arranger in Ghost Quartet; composer Robert Ashley, in his final opera, CRASH, in a part that was written for her, and the revival of That Morning Thing; visual artist Matthew Barney and composer Jonathan Bepler, as part of the vocal trio in the Wake Ensemble in The River of Fundament; composer Kate Soper, in her opera Here Be Sirens; composer John King, alongside Joan La Barbara in his Micro-Operas, as well as Impropera; choreographer Yasuko Yokoshi, for BELL; composers Rick Burkhardt and Brendan Connelly and the Theatre of a Two-Headed Calf, for their opera You, My Mother; in various projects with composer and fiddler Cleek Schrey, as well as composer and glass player Miguel Frasconi; composer Anthony Gatto and sculpture Chris Larsen in their opera Wise Blood; Avant Media, for various performances of the music of John Cage; and Panoply Performance Lab, for the recording of their opera Institute_Institut.

In January of 2015, Gelsey received her PhD in Performance Studies from New York University. Her dissertation, Voice-Acts: Performance and Relationality in the Vocal Activities of the American Experimental Music Tradition, traces the stories of five experimental composers writing music for their own performing voices during the 1970s. She was awarded the Monroe Lippman Memorial Prize for her dissertation and the 2012 NYU Stefanos Tsigrimanis Artistic Scholar Award. She has published articles in Tempo, Performance Research, TDR/The Drama Review, The Journal of Interdisciplinary Voice Studies, and Movement Research Performance Journal. She is an Associate Editor for The Journal of Interdisciplinary Voice Studies and served as the Critical Acts Editor for TDR/The Drama Review for over ten years. She is part-time faculty in the College of Performing Arts at the New School. 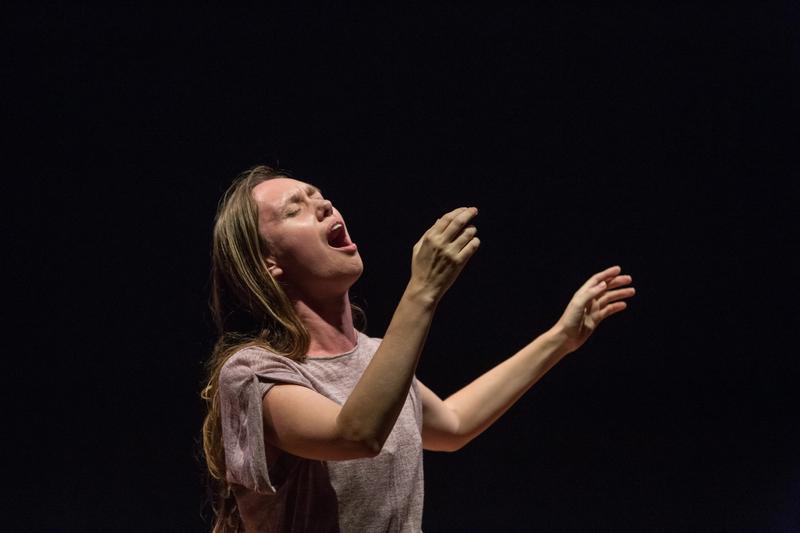